Saying sorry to your Dominant can be tough, especially if you feel really guilty about what happened or you’re afraid it means you’re a bad submissive. (Pro tip: It almost never means that.)

Apologizing to a submissive as a Dominant can feel like you’re giving up some level of control. Guess what? You’re not. You’re being a decent human being. (Pro tip: You’re (usually) earning trust and respect and proving that you’re worthy of continued submission by your partner.)

Here are a few things to consider.

Unfortunately, there are Dominants out there who think that because they’re the big D, they can never be wrong and so never need to apologize. Ugh, gross. Less bad (but still highly problematic) are the Dominants who worry that apologizing for wrong-doing makes them appear weak. Still, ugh, and also, wrong.

Submissive Shouldn’t Have to Grovel

Okay, if groveling is your kink and it’s part of your power exchange, have at it! But outside of that, an apology, a consequence (if it’s been negotiated), and communication should be the end of whatever wrong-doing occurs. No submissive should have to jump through hoops, beg for forgiveness, or debase themselves in a way that’s unhealthy or toxic because of a simple error.

Consensually giving up control doesn’t mean submissives are inherently less worthy of forgiveness. And if a Dominant requires all of that and it’s NOT part of a consensual humiliation kink, that’s a red flag waving at full mast. Yes, anyone who fucks up should convey in as sincere a method as possible that they’re sorry, but submissives shouldn’t subjected to anything more severe simply because they’re the little s.

Apologies are Only the First Step

Words are cheap and easy. An apology is a good first step, but what happens next matters most. Does the behavior change? Are corrections made? Did you talk about it and does the issue feel resolved (even if your feelings might be a bit tender)?

Whether it’s you or your partner who has screwed up and needed to apologize, the steps you take next will determine how well things work out. If you lied, become someone who’s ridiculously honest — and work on why you felt the need to lie. If you broke a rule, think about why and if there are barriers — physical, mental, or emotional — that lead to that moment.

Saying you’re sorry and repeating an error leads to a lack of trust and a rupture in your D/s relationship. 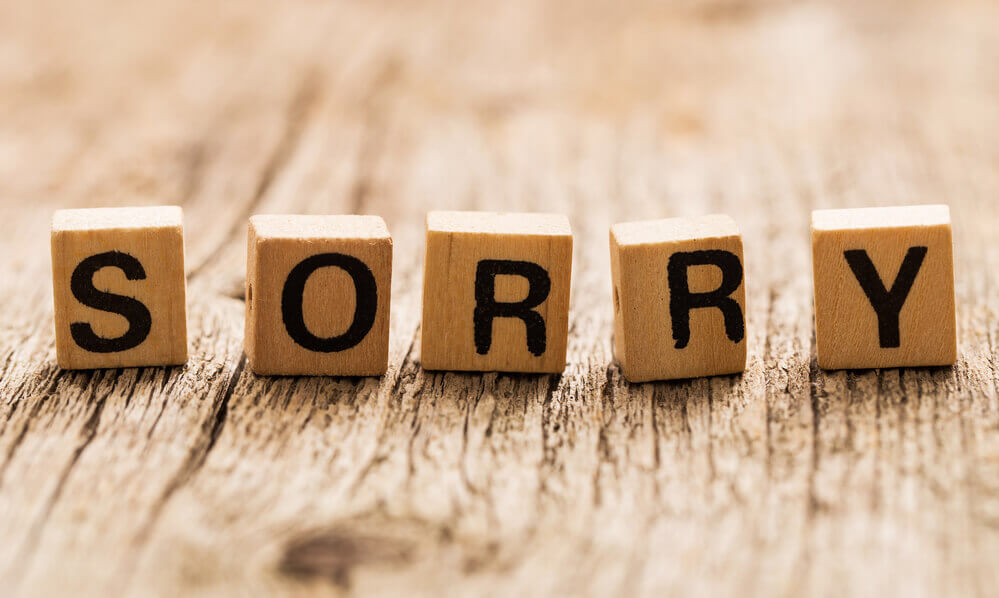 Anger is Fine, but It Can’t Last Forever

I’m not saying you’re required to get over being angry at your partner by some arbitrary deadline. The size of the problem will likely be directly proportionate to the time you need to feel okay again. But if your partner’s apologies and (hopefully) changed behavior doesn’t soothe your anger, there’s something else going on.

Of course, the first step in finding the solution is communication. But do a little soul-searching first. Was this one of your limits in what you will or won’t accept from a partner? Did their action trigger a memory from a bad tape (like a previous bad relationship)? Is your trust completely broken?

These are bigger issues and need time to be resolved. But you have to be willing to work on it. And yes, sometimes, the solution is that your D/s relationship has to end because some problems are too big to overcome.

Apologize When You Mean It

If you’re not sorry for something and have no intention of changing your ways, don’t apologize. Saying you’re sorry implies that you won’t do it again or that you understand you hurt your partner. The moment you repeat the behavior, your partner’s trust will erode even more. The exception to this would be if you say, “I’m sorry you’re upset, but I’m not changing.” That sucks but at least it’s an honest statement and lets your partner know where they stand. (Pro tip: That could be the end of things for you both.)

Sincere apologies are always better than false ones. You might still fuck up again later because we’re all works in progress. Knowing that our partner recognizes the hurt they’ve caused and are genuinely upset by it can soothe tempers and hurt feelings. It’s the beginning of the healing process.

But if you’re not going to apologize, own it. Tell your partner. Don’t leave them hanging and waiting for a “sorry” that’s never going to happen. And if you refuse to apologize, think about why that is. If you’re not sorry for causing them pain or upsetting them, there must be a reason.

Consequences Must Be Negotiated

In many D/s relationships, when a submissive messes up, an apology is only the beginning. What may come next is a consequence. Before a Dominant doles one out, it must be negotiated and consented to by both of you. Ideally, this should be done long before you need it. Attempting to figure out a deterrent for future bad behavior becomes a lot more complicated if a submissive feels guilty, angry, or uncertain about current behavior.

If you don’t have a consensual consequence in place, wait until things are back to normal and plan one for the future — IF you want this power exchange element in your D/s relationship, and ONLY then. Dominants do not get to arbitrarily decide that a submissive has earned a consequence for poor behavior without their consent. Doing so is a major red flag.

Fucking up and saying you’re sorry is sometimes really simple and sometimes really complicated. If the goal is to build a happy, healthy D/s relationship, part of that is owning your mistakes and working to help your partner feel better. Neither Dominants nor submissives are above apologies and correcting their behavior.

And one more thing, if you get plenty of apologies but the behavior never changes, it’s time to look at whether this is the best D/s relationship for you to be in.

Your turn! Are there things that no apology can fix? How have you handled past moments when you’ve fucked up and had apologize? Share in the comments below or talk to us on Twitter!

About 6 days ago from Loving BDSM's Twitter via Jetpack.com

About 2 weeks ago from Loving BDSM's Twitter via Jetpack.com

About 3 weeks ago from Loving BDSM's Twitter via Jetpack.com

@CassieKoi I've been leaning into IG more over the past year or so, and I might even use Fetlife for more than answering DMs. But that's probably about it. I only keep a Twitter account for people who happen to be here, too. So no plans for any new platforms (as of right now, lol) ~KL