Disclosure: We received this product in exchange for an honest review.

Vibrators are very much a part of our sex life and our kink life. We use them during penetrative sex. We use them for orgasm control fun. And I use them as the easiest and quickest way to not only get off but to get off multiple times. 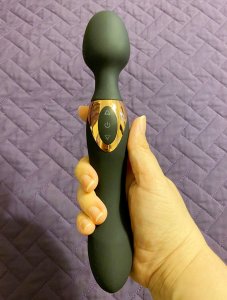 It vibrates at both ends!

The top is the wand massager great for external stimulation. But the bottom is curved slightly with a bit of a bulbous end designed, clearly, for internal G-spot stimulation. I’m not much for G-spot vibrators. I’m a clit-girl from way back. Thankfully even “G-spot vibrators” are great for the clitoris.

A few other details to know about the Rhea: 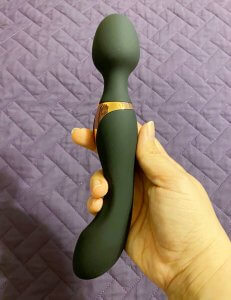 On the lowest setting, it felt really good. Like…really good. Pleasure emanating from the center of my body, building through every nerve-ending, exploding out of my entire body good. But it wasn’t enough to get me off as quickly as I’d like. (I’m not exactly known for my patience, y’all.)

I cranked it up, and the orgasms began rolling in.

The first one was pleasant. A quiet release.

The second one was more intense.

By the third and fourth, I was locked in a battle between my greedy babygirl self who mentally screamed, “More! More! More!” and my clit who begged me to stop.

And what about the G-spot end?

It was…nice. But it wasn’t my favorite. Not because it didn’t work well or feel good. But because why would I settle for anything other than my favorite when I have the choice?

About V for Vibes

If you’re trying to build up your sex toy collection, they have sex toy kits that bundle up a couple of items together.

They currently only ship within the US, Canada, and the UK. Shipping is discreet.